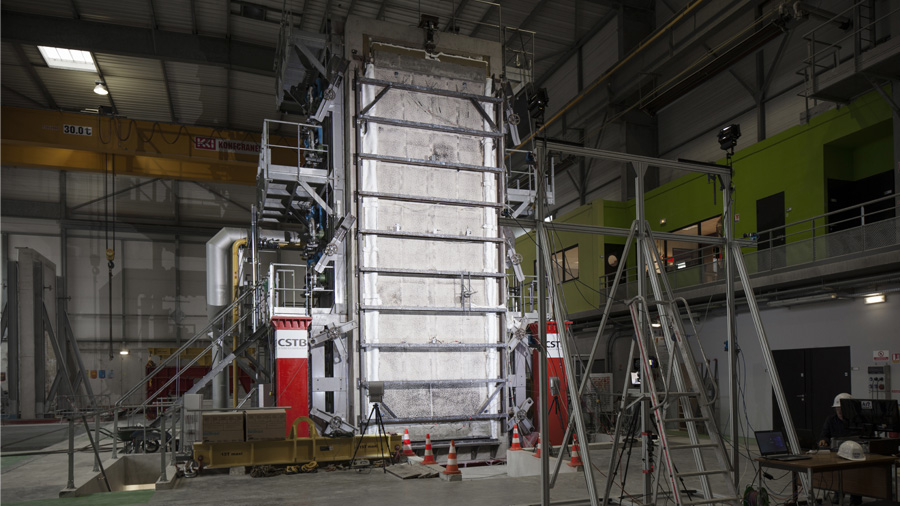 Modular furnace at the Vulcain test facility of the CSTB. Photo: Florence Joubert

To optimize the fire loading of large structures, which are increasingly used in industry in particular, the CSTB is developing an approach that combines calculation with full-scale testing. After developing a new prediction model, the CSTB carried out an exceptional test on the fire resistance of a 9-meter-high reinforced-concrete panel. Here's a look back at this innovative R&D experiment, conducted at the CSTB's Vulcain testing facility, to get a more in-depth understanding of the fire behavior of large structures.

The challenges of high rise structures

The challenges of high rise structures In the event of fire, the behavior of a structure depends on the material, but also on its size, particularly its height, and on the configuration of the premises. Firefighters understand this well. A team of Seine-et-Marne firefighters attended the test, run by the CSTB at its Vulcain test facility. The firefighters' aim was to improve their techniques, by better understanding the fire behavior of large structures.

The fire resistance of large-sized concrete panels also interests fire-safety experts, who came from Italy, Belgium and the United Kingdom to observe the CSTB's test. The use of such panels is becoming more and more common in large-volume buildings, such as logistics warehouses and factories. The objective is to size these panels properly, so as to minimize the risk of fire.

When a structure is exposed to very high temperatures, the higher it is (at equal thickness), the more it tends to deform. When it reaches a certain threshold, the change in the shape of the wall is a factor that contributes to the wall's collapse. The other critical effect of heat concerns the deterioration of the material's characteristics.

What is the maximum height that the walls of a building should not exceed, in order to ensure that the building resists fire for the time required by the regulations? If a building has 9-meter-high walls, how long will they remain stable in the event of fire?

The aim of the fire resistance test of the CSTB was to provide clearer answers to these questions. If these issues are taken into account when buildings are designed, there will be enough time, in the event of fire, for people to be evacuated and for the firefighters to do their job. In addition to obtaining the figures, the test also sought to identify the kinematics of the building's collapse, in order to pinpoint the warning signs before the critical moment.

In order to increase the precision of the research being conducted, the CSTB has developed a new calculation model for structures higher than 3 m. The fire resistance test at full scale conducted at the Vulcain test facility, on a 9-meter-high load-bearing wall, made it possible to validate this model.

Prospects of the test

The post-test analysis of the data is essential to gain in-depth understanding of the deformation of a 9-meter-high concrete structure exposed to fire. It will also enable the CSTB to offer professionals a more comprehensive offering in fire safety engineering for large structures (up to 9 m), combining simulation and full-scale testing.

Behind the scenes at the Silver BIM Awards 2018: the Jardins de l'Arche Tower in La Défense with the CSTB

“Modernization of the Jules Verne wind tunnel in 7 months”

Coronavirus health crisis, the CSTB and its teams are mobilized to ensure the continuity of our services to all clients and partners

François Jallot appointed Director of the Safety, Structures and Fire Performance Department at the CSTB