At the Sophia-Antipolis technology park, the CSTB semi-virtual laboratory - the only one of its kind in France - evaluates energy systems in buildings. Real components are tested in a virtual environment which simulates the behavior of a building and its equipment, subjected to climatic changes and the varying usages of its occupants. This asset is particularly useful for rapidly characterizing the energy performance of innovative products.

Tests of equipment and multi-function or multi-energy systems

Tests in the semi-virtual laboratory allow an assessment of annual energy performances and/or the assessment of the robustness of complex systems in just a few days. The tests are reproducible because the testing conditions are perfectly mastered. This type of test is especially useful when an innovation is at the prototype stage, before onsite testing.

Real-life experiments in a semi-virtual laboratory

Compared with digital simulation alone, this method has the advantage of testing a real product rather than a model of the product. 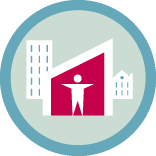